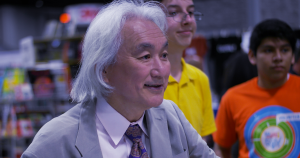 String theorist and science populariser Michio Kaku believes that the James Webb Space Telescope will find life on other planets — but he doesn’t think it’s a good idea to reach out to them.

The professor of theoretical physics at City College, New York spoke to The Guardian about his trepidations in an interview about his upcoming book The God Equation. He says he believes that we are on track to discover alien life within a century.

“Soon we’ll have the [Webb] telescope up in orbit and we’ll have thousands of planets to look at,” Kaku said to The Guardian, “and that’s why I think the chances are quite high that we may make contact with an alien civilization.”

However, the string theorist and best-selling author doesn’t believe that we should be so quick to reach out to other lifeforms even if we did find them.

“There are some colleagues of mine that believe we should reach out to them. I think that’s a terrible idea,” he said to The Guardian. “We all know what happened to Montezuma when he met Cortés in Mexico so many hundreds of years ago. Now, personally, I think that aliens out there would be friendly but we can’t gamble on it. So I think we will make contact but we should do it very carefully.”

He doesn’t make it clear who is Montezuma and who is Cortés between the aliens and humanity — and, frankly, we’re not sure what’s scarier.

Bill and Melinda Gates to Divorce After 27 Years of Marriage...

Demand for IT Skills Skyrockets Amid Pandemic

How much revenue tech giants like Amazon and Apple make per ...

SpaceX has safely landed 4 astronauts in the ocean for NASA,...

Vaccine passports are the nudge we need to achieve herd immu...
newsletter
subscribe for YouMedia Newsletter
LET'S HANG OUT ON SOCIAL